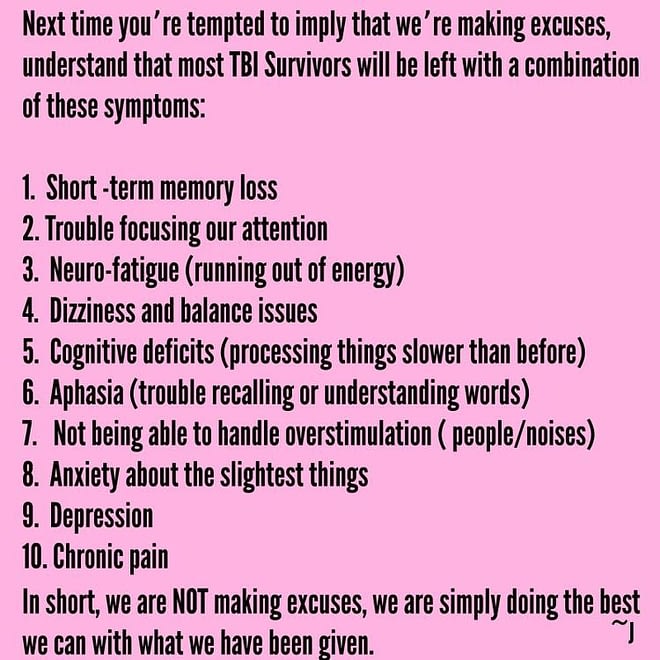 Did you know March is Brain Injury Awareness Month?

I was not aware of this, and I have a brain injury. I only found out because I was tooling around social media and accidentally ran into an announcement. That I was unaware tells me that there is a much greater need for brain injury awareness.

Having done research, I know that there are brain injury associations all around the nation. They have state conventions. There hold seminars about brain injuries, what to expect, how to live with them, how to deal with them. But there isn’t a great national presence about something that affects a fair amount of people. There’s definitely room for more awareness.

I looked up brain injury awareness on Twitter and I found this graphic. I don’t know who made it, so I don’t know to whom to give credit.

It states that most TBI survivors will be left with a combination of these symptoms. Let’s run through the list, and I’ll tell you about how it relates to me.

For months after my heart attack, I had a severe problem of forgetting everything I was doing almost immediately after being told to do it. I couldn’t remember where the silverware despite them being in the same drawer for 20 years. I couldn’t find my underwear, and they had been in the same place for decades.

I wanted to work almost immediately after I got out of the hospital, but I didn’t have the energy and once assigned a task, couldn’t remember it long enough to complete it. I am thankful everyone understood, supported me, and had a lot of patience.

My short-term memory loss got better over time, but after five and a half years I still need to set reminders on my phone for common tasks. Your phone is your ally. Use it for reminders, To Dos, and calendar events often.

This has been a problem for me for most of my life. If I was a younger person, I would have been diagnosed with ADD, ADHD or something that had to do with attention deficit. There’s always about 23 things running through my mind, so it’s not unbelievable I have problems focusing my attention.

I do a lot of different things. I work in IT in my regular job. I write. I podcast. I do photography and do YouTube videos. I enjoy doing these things. Whenever I sit down and think that I should cut something out. I’ve concluded I don’t want to. And yet. That I my goal would be rather to increase my energy, rather than cut something out of my life.

This leads to number three:

This is a genuine issue. I have talked to people who’ve experienced strokes, and TBIs, and they relate the same thing. Everything they do wears them out much more quickly than before their incident.

Most of the problems I work on in IT are very difficult. They can tax me much more than they used to be before I had my brain injury. There are specific things which exhaust me quickly. Anything that requires me to hold a lot of variables in my head, such as working on database servers, data sets, or firewalls can quickly drain my mental energy in a matter of minutes. I have to take frequent breaks during which I either take a brief nap or meditate.

(I am going to explain more about neuro-fatigue in another series of posts. Stay tuned!)

I seem to have dizziness and balance issues more from the medication I take than because of a brain injury. I get dizzy, if I put myself in an awkward position and then move quickly, and when I say “awkward position” I mean physically not socially. I am constantly awkward socially. That hasn’t changed since youth. Physically, though, this occurs when I’m working in a data center and have to tilt my head weird to find a serial number, if I’m at the dentist, being tilted back in a chair, or if I’m doing photography and put myself in a not-so-normal position for a shot. Bottom line – this doesn’t happen a lot, but I have to be aware that when I’m in those situations that my balance may be an issue.

Before my heart attack and death, I learned quickly. Customers hired me because I learned technology quickly, then I could teach it to them. This is still the case, although I admit I am much, much slower than I used to be. (I bill by the hour, so this isn’t entirely bad! Maybe.)
My most obvious deficit is in hearing or the audio processing part of my brain. I went through hearing and vestibular testing about a year after my heart attack. Vestibular testing determines whether you have damage to your inner ear, and can evaluate dizziness and balance. I passed these tests with flying colors, much to the chagrin of my wife, who concluded I ignore her rather than having difficult hearing.

I have difficulty interpreting speech. I am unsure whether I hear well (despite the earlier test) or if my brain is damaged. I frequently ask people to repeat themselves. I have difficulty watching movies without subtitles.
I have much more difficulty now than I’ve ever had in trying to understand someone with an accent. I have spent my career in IT as the guy who always talked to foreigners, as I had no difficulty with other countries’ accents. I spent a couple years in engineering while I was at the University of Nebraska, and in doing so, was around people from India, Pakistan, Malaysia, Persia (Iran, but they referred to themselves as Persian at the time because of politics), Korea – many areas around the world.

Now… I have difficulty understanding them. Worse yet, trying to listen to them and interpret them is exhausting. This is painful – not in a “body ache” kind of way, but in a “this sucks ass” kind of way because when I struggle in understanding people it is a constant reminder of the damage I’ve sustained. I’ve always enjoyed talking to many different people and learning from their experiences. Now it’s a constant source of frustration and remembrance of a life I had but will no more.
I am still trying to figure out how to deal with this part of my life. I am considering going back for another hearing test. Certainly all that punk rock from the 80s did some damage, did it not?

The concept of cognitive deficits brings forth another subject on brain injuries – one that is not on this list. How much we – those of us with brain injuries – try to hide our deficits. I will cover this later.

This has been part one. Part two is here.

Thanks for listening, please leave me some feedback!