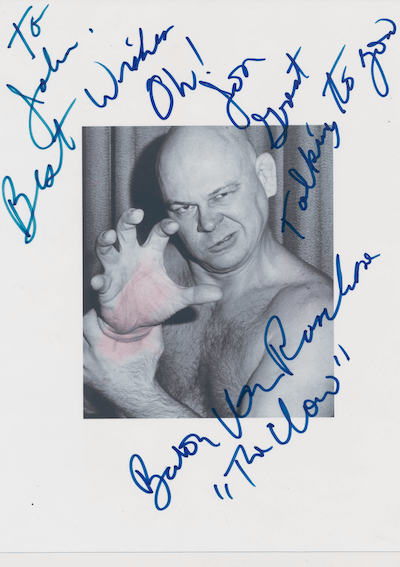 This is the story of how a man found success by becoming someone else.

A few years ago, I attended an annual golf outing at a university in Nebraska alumni event in Minnesota. Mike Rozier was the guest speaker. Rozier is a Heisman Trophy winner and famous amongst those who follow college football as heavily as I do. I don’t golf, so I typically sit in the clubhouse and wait for the golfers to return, at which point we have dinner and listen to the featured speaker.
Sitting in the clubhouse gives me a chance to talk to other alumni. On this occasion, I walked in to discover Baron Von Raschke and his wife, Bonnie, sitting in the clubhouse alone. Baron von Raschke is a famous professional wrestler. His heyday was throughout the 1970s and early 1980s, wrestling for the AMA – the American Wrestling Association. His famous move was “the claw”, in which he formed his hand into a claw and clamped it around an opponent’s head and squeezed them into submission.

“The Baron”spoke with a raspy voice, sometimes in guttural German. He was an incredible villain. He enraged people playing up post WWII sentiment against Nazis. He’d wear a red robe and say things like “I am ordered to win.”

He was an incredible character. I loved him as a kid. Maybe I loved to hate him. Either way, I found him fascinating.

I sat and talked to Jim Raschke and Bonnie long enough for him to tell his life story.
Mr. Raschke won the Nebraska state heavyweight wrestling championship in 1958. He headed off to the University of Nebraska, where he won the Big Eight Conference heavyweight championship. Raschke played football for two years, won a bronze medal at the 1963 World Games and made the Olympic team in 1964. He was injured just before he was to head to Tokyo. It was one of the worst days of his life.
Raschke did a stint in the US Army, being drafted on the day JFK was shot. When he finished basic, his commanding officer told him he could go to New York or to Washington. He knew nothing about New York. He wasn’t aware of how big it was – he thought it was a town like Omaha where he had grown up. Raschke wrestled his way through the Army, and after his service, headed back to his native Omaha, where he taught school.

He was only making $5,000 a year as a teacher, which wasn’t enough. Per chance or fate, and an Army contact, he ended up in Minneapolis helping with production of professional wrestling bouts. He’d help set up the lights and the ring, then spend his time in a production booth instead of wrestling. The wrestlers would walk by the booth, paying him no attention until one day, a wrestler named Mad Dog Vachon (real name: Joseph Maurice Régis Vachon) walked by, poked his head into the room and said, “You’d be a very good German.” Vachon did this a few times and when it was time for him to leave, he asked Raschke to come with him to his native Quebec and be his tag team pattern. Vachon was loved in Quebec. He was a hero.

Raschke explained he was always an introvert. He knew it had hurt his chances at fame. He was quiet and didn’t handle interviews well. Now here he was in Quebec. He didn’t speak French. He said Vachon had just completed an interview, and next they wanted to interview him. Raschke had taken German in high school, and still knew a few words. He used the German word for “destroy” a lot because it was one he remembered. He did the entire interview in guttural German. When we talked, he made it sound like a spur-of-the-moment idea. I’m sure it wasn’t that way. I’m sure it was planned. They’d call him “The Baron”. He’d speak German and be a menace.

Planned or not, there was that moment where he did his first live interview after a wrestling match. In that moment, the “Baron” was born. Baron von Raschke never had a problem portraying himself in the media. Raschke said that until he became someone else he was always nervous and terrified to talk to the media because he always said something wrong. It had hurt his career. The moment his new character was born he didn’t have to be himself anymore.

It was a beautiful story of transformation, a transformation that took “Little Jimmy Raschky from Nebrasky” and turned him into the legendary Baron Von Raschke, THE CLAW, a man who enraged people wherever he went.

The transformation appeared even more incredible after talking to him and Bonnie, because they were two of the sweetest people I’ve ever met. The two talked about how they met and married in only a few months because they knew they were perfect for each other. They’d traveled the world together and made a family. They were a perfectly matched pair.

I tried as hard as I could to get him to admit the wrestling was fake, that THE CLAW hold was fake. He’d talk about a wrestler, and I’d ask if he ever beat the guy.

He’d look at me as if I were stupid, and say, “We wrestled.”

I tried several variations of the same question. The answer was always the same.

It was clear his memory was causing issues as Bonnie corrected him occasionally, but he never strayed from giving me that look and that answer.

It kept my childhood memory of him intact. Those were the days of Mad Dog, The Baron, Reggie “The Crusher” Lisowski, Mean Gene, Ed Farhat – “The Sheik”, Andre the Giant, and the early days of Hulk Hogan. They would travel around the country, playing hero or heel, depending whether they were in their home territory. It was grand entertainment.

Jim Raschke and I had three beers together. He was going to have another beer, but Bonnie frowned at him. He gave it to me, so I got a beer from Baron von Raschke.

I am captivated by the transformation of “Jimmy” to “Baron”, two so different people. I had a goal of returning to public speaking about my heart attack and traumatic brain injury when the Covid-19 pandemic hit. Six years later, I remain challenged to tell my story without crying. I hate it. I can tell it if I do it as a standup act, or if I switch my voice to a Southern twang, ala “Dan Whitney as Larry the Cable Guy”. All of those seem too weird, too off-base for anyone to take seriously.’ 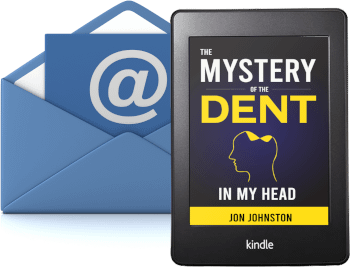 The Boy Who Couldn’t Kick A Ball

Make A Good First Impression? No. Make a Memorable Impression Instead